Heavy thoughts on a Thursday in June 2011

It’s not heavy it’s my data: 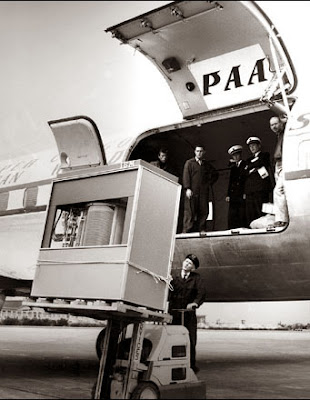 Today’s picture is from 1956, and shows an IBM hard drive. This unit would be used to store information, not unlike your memory stick, thumb drive, or camera memory card. The hard drive pictured weighed over 1 ton, and was capable of storing 5 Mb or data. For comparison, it would take over 1,000 of these units to store the information held in a modern thumb drive.

Andrew Sullivan assembles evidence on an even weightier subject, and asks for “any thoughts”:

“At what point do we decide that a political system has become decadent?”

EJ Dionne takes the Weiner “scandal” as the moment he realized we were late imperial Rome. PM Carpenter takes the Bush vs Gore Supreme Court ruling. Personally, I think it was some moment between the Congress’s assent to torture in 2006 and when Sarah Palin was selected as a serious vice-presidential nominee in 2008.

I believe this was a subject on my AP History essay question, though that occurred somewhere far across the mists of time, during  our republican era.  Or does Sullivan mean to refer to republican Rome?  Does it matter?  To be fair to Carpenter and Dionne, neither goes Gibbon on the US of A.  That’s Sullivan’s off-the-cuff addition.  (I’ve described my own thesis on the subject  before, but may need to do so again on some other even more heavily thought-laden day:  Advancing whatever unique positive contribution America had to make to world history requires other people’s energies.  It should be about managing relative decline for us, which may be a lot better, or a lot worse, than it sounds.)

From the L.A. Jewish Journal: