On a right wing and a prayer

In the four months since Perry’s request for divine intervention, his state has taken a dramatic turn for the worse.  Nearly all of Texas  is now in “extreme or exceptional” drought, as classified by federal meteorologists, the worst in Texas history.

Lakes have disappeared. Creeks are phantoms, the caked bottoms littered with rotting, dead fish.  Farmers cannot coax a kernel of grain from ground that looks like the skin of an aging elephant.

Is this Rick Perry’s fault, a slap to a man who doesn’t believe that humans can alter the earth’s climate —  God messin’ with Texas? No, of course not.  God is too busy with the upcoming Cowboys football season and solving the problems that Tony Romo has reading a blitz.

But Perry’s tendency to use prayer as public policy demonstrates, in the midst of a truly painful, wide-ranging and potentially catastrophic crisis in the nation’s second most-populous state, how he would govern if he became president.

“I think it’s time for us to just hand it over to God, and say, ‘God: You’re going to have to fix this,’” he said in a speech in May, explaining how some of the nation’s most serious problems could be solved. 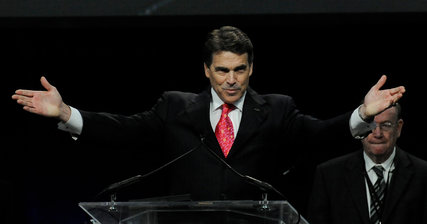 That was a warm-up of sorts for his prayer-fest, 30,000 evangelicals in Houston’s Reliant Stadium on Saturday. From this gathering came a very specific prayer for economic recovery. On the following Monday, the first day God could do anything about it, Wall Street suffered its worst one-day collapse since the 2008 crisis. The Dow sunk by 635 points.

Prayer can be meditative, healing, and humbling.  It can also be magical thinking.  Given how Perry has said he would govern by outsourcing to the supernatural, it’s worth asking if God is ignoring him.

Though Perry will not officially announce his candidacy until Saturday, he loomed large over the Republican debate Thursday night.  With their denial of climate change, basic budget math,  and the indisputable fact that most of the nation’s gains have gone overwhelmingly to a wealthy few in the last decade, the candidates form a Crazy Eight caucus.  You could power a hay ride on their nutty ideas.

After the worst week of his presidency (and the weakest Oval Office speech since Gerald Ford unveiled buttons to whip inflation), the best thing Barack Obama has going for him is this Republican field.  He still beats all of them in most polling match-ups.

Perry is supposed to be the savior. When he joins the campaign in the next few days, expect him to show off his boots; they are emblazoned with the slogan dating to the 1835 Texas Revolution: “Come and Take It.”  He once explained the logo this way:  “Come and take it — that’s what it’s all about.” This is not a man one would expect to show humility in prayer.

Perry revels in a muscular brand of ignorance (Rush Limbaugh is a personal hero), one that extends to the ever-fascinating history of the Lone Star State.  Twice in the last two years he’s broached the subject of Texas seceding from the union.

“When we came into the nation in 1845 we were a republic, we were a stand-alone nation,” says Perry in a 2009 video that has just surfaced.  “And one of the deals was, we can leave any time we want. So we’re kind of thinking about that again.”

He can dream all he wants about the good old days when Texas left the nation to fight for the slave-holding states of the breakaway confederacy. But the law will not get him there. There is no such language in the Texas or United States’ constitutions allowing Texas to unilaterally “leave any time we want.”

But Texas is special.  By many measures, it is the nation’s most polluted state.  Dirty air and water do not seem to bother Perry.  He is, however,  extremely perturbed by the Environmental Protection Agency’s enforcement of laws designed to clean the world around him.  In a recent interview,  he wished for the president to pray away the E.P.A.

To Jews, Muslims, non-believers and even many Christians, the Biblical bully that is Rick Perry  must sound downright menacing, particularly when he gets into religious absolutism. “As a nation, we must call upon Jesus to guide us through unprecedented struggles,” he said last week.

As a lone citizen, he’s free to advocate Jesus-driven public policy imperatives.  But coming from  someone who wants to govern this great mess of a country with all its beliefs, Perry’s language is an insult to the founding principles of the republic.

12 comments on “On a right wing and a prayer”