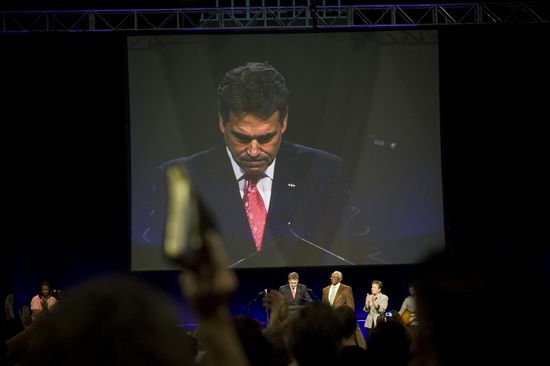 [E]xamine the candidacies of the two front-runners for the GOP. One launched his campaign in a revival meeting calling for God to solve our economic problems (having previously led mass prayers for the end of the Texas drought); the other emerges entirely out of Dominionist theology and built her entire career in the Christianist world of home-schooling, and anti-gay demonization. One reason Mitt Romney is not a shoo-in? Sectarianism, and his own previous deviations from binding orthodoxy. And it is this fundamentalist mindset – in which nothing doctrinal can be questioned, and the real world must be bent to the shape of a rigid theo-ideology – that defines these two candidates.

Hence Bachmann’s belief that the entire deficit can be ended in short shrift solely by massive cuts in spending. This “spending alone” principle cannot be compromised, since taxation in and of itself is a way in which the liberal elites control people’s lives. It doesn’t matter what economists say about the consequence of wilful default or of austerity too sharply imposed. It only matters what God says. And God is bound up with a radical American theology in which slavery was more benign than the Great Society, and that the Founders were abolitionists. That American theology creates the justification for the use of American military power across the globe, especially in protecting and advancing Greater Israel, Bachmann’s and Perry’s fundamentalist cause of causes.

This is what this party now is: a religious movement clothed in anti-government radicalism. It has nothing to do with the conservative temperament, conservative political thought or conservative ideas. It is hostile to most existing institutions, especially government, contemptuous of the courts, and seized of an ideology as rigid as any far-left liberalism, as utopian as any wide-eyed socialist, as fanatical as anything the left spawned in the 1960s.

And it has hijacked an entire political party; and recently held to ransom an entire country. I knew it would get worse before it gets better. But this bad?