A request for an Other-Gentleperson’s-Comment Quoter-Replier feature (OGCQR) was answered with addition of same. However, it comes with minor hinks that just so happen to show up on Firefox, my main browser for development work, preventing me from fully conveniently availing myself of said new handy-dandy feature. 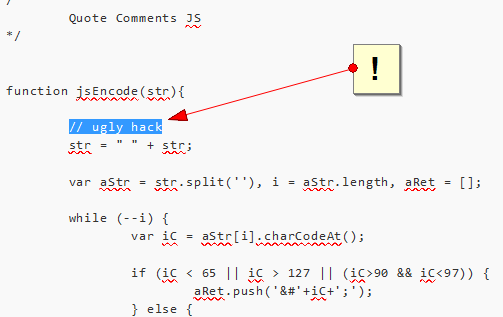 In point of fact, I borrowed the code from an in web terms old and coder-confessedly (see ill.) dodgy piece of thing, and will be adapting a less-old and, one may hope, less-dodgy thing-piece soonish.

There are numerous bits of old code floating around the Ordinary Times installation. That’s not always a bad thing, old code often being good, compact, efficient, tested code, but time and progress do march on.

“Subscribe to Comments (S2C),” the plug-in that produces comment-subscription forms, is one piece of very old code, rated “compatible” up to WordPress 2.3.1, dated 2007 (we’re today in the epoch of WordPress 4.1.1).

It turns out, however, that someone wrote a successor to S2C, “Subscribe to Comments Reloaded” (S2CR), that already includes features not present in S2C, and that promises to take over S2C’s database no probs – making, potentially (and as so far tested), for a smooth changeover to a superior and currently supported implementation of about the same functionality. So, this weekend, Lord willing and the site don’t crash (LWSDC), I’ll be switching over to S2CR, and, I hope, also seeing if doing so cures a problem reported by one user who got hit by a weird bug disrupting his subscriptions.

S2CR also includes the option to make comment subscription the default for those who comment, plus another option to send subscription-confirmation emails out. I think both options together make for a superior package. In other words, if anyone leaves a comment and doesn’t do anything else – like un-check the checkbox – he or she will be auto-subscribed, but won’t start getting comment emails until confirmation.

Specifically on the CFs, people wanting to contact OT now have two to choose from, one for “editorial/general” inquiries (to be monitored by the editors), one for “help/features/glitch-reporting” (at this point monitored by me). I expect later to be adding contact pop-up forms accessible from every page, but it’ll be best-practicer to keep static versions, too, accessible when for whatever reason the pop-ups aren’t – bad form when there’s something to report that prevents reporting of that same something.

Also: It’s now OK to say “Heidegger” and “Wittgenstein” in OT comments, and also to include up to 3 links (not including one’s own commenter link) without getting sent to moderation as a suspect spammer. If problems like the ones that led to the banning of those two names recur, maybe we’ll move early on some community self-moderation ideas.

Last change to mention: In response to a contributor’s request, and because I think it’s a good idea, I expect shortly to be introducing an author-bio-box that will appear automagically (and retroactively) on all posts, though the results will depend on the extent to which the authors cooperate…

I’ll leave later for later, LWSDC, except to say that, since posts like these may get as boring for most users as the changes they describe get complicated and time-consuming for anyone toe execute, I’ll be looking at other ways to keep everyone notified and clued-in and feedbacking, reserving posts and “featured-level” posts especially for things I think the community really needs to discuss, or might really enjoy discussing. In fact, this post started out as a post intended for OT, but it was only after working on it for a day or so that I decided to keep it here, for my own design/development “notebook,” rather than publish it over there.

POST IMAGES BY AUTHOR, BASED ON Vintage vector designed by Freepik.