The things the body cries out for… 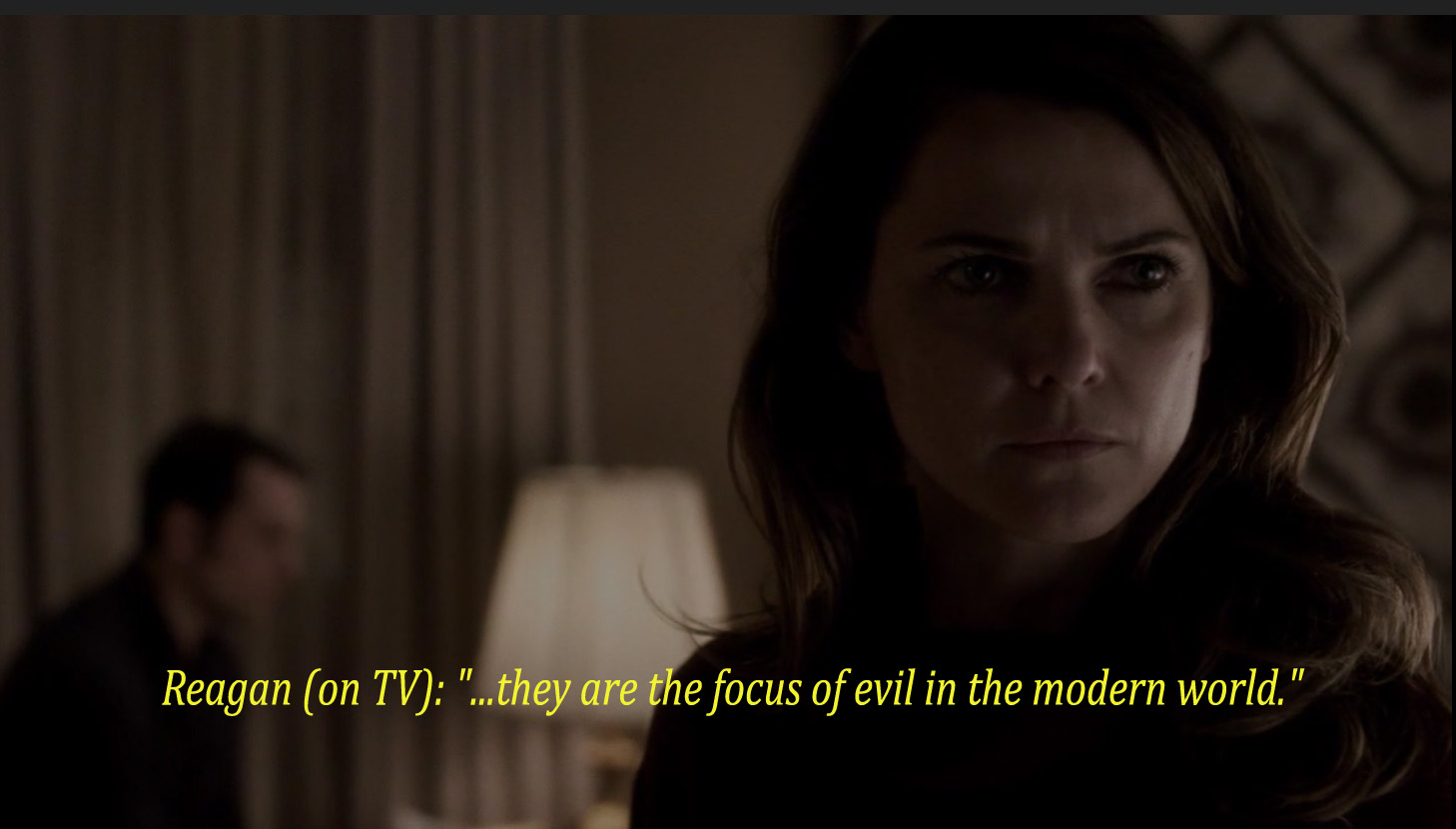 In a conversation over at OT begun by “Glyph” about THE AMERICANS, whose Season 3 finale was broadcast last week, I ended up taking the position that the sheer unreality of the show’s scenario might have something subtly to do with its failure to develop an even moderately large audience in contemporary cable TV terms:

The plot consists now almost entirely of filling in, as movingly, richly, and believably as acting and period detail and real history can make it, the abyss that sits there in place of realistic foundations. I somehow think that the widely observed critical success/popular failure is tied to this problem. It’s not that the concept is more outlandish or incredible than the concepts of more successful shows, but that the characters just don’t make sense to the average viewer. They’re not just anti-heroes: They’re voids. To the extent they’re “like us,” it’s in a way that we don’t like to contemplate: They’re as meaningless and empty and morally compromised as we are.

I was not trying to suggest that the TV audience demands its fictions true to life – not at all. I was suggesting that the relentlessly serious or some might say grim and humorless tone of the show in combination with characters and predicaments that are senseless as well as incomprehensible ((See additional discussion following from the comment already linked.)) leaves people cold. Like BREAKING BAD, THE AMERICANS does not really sustain scrutiny, but BREAKING BAD, though never a hit on the level of the Prime Time institutions of yesteryear, was sometimes played for laughs… not least by playing the darkness of the story against its bright, compulsively upbeat Southwest American-suburban ambience. (Perhaps a cheap irony, but we seem never to get enough of it.)

A TV executive whom I met during one of my past lives last century put the matter simply. The man, whose name I have forgotten if I ever knew it, was a longtime associate of Aaron Spelling, producer of such very un-THE AMERICANS American TV fare as THE LOVE BOAT and BEVERLY HILLS 90210. I was told that Spelling’s insight, achieved during the advent of color television and extended during the period of exponential expansion of television venues, focused on channel-surfing. According to Spelling, I was told, TV viewers looking for something to watch would more often pause to view, and more often stay with and return to, shows that featured bright colors (and I think, by implication, brightly dressed, attractive and upbeat people).  So, this:

… but certainly not this:

…and not the image with which we started either.

The sub-titles in the last image are words spoken by the character on the left, a physicist who has been kidnapped (abducted by our anti-heroes) and forced to work for the Soviets. The phrase finishes his description a la Solzhenitsyn of what, he says, individuals seeking true freedom from the totalitarian state must be willing to deny themselves. Spelling’s insight, if it qualifies as an insight, suggests that the showrunners, though they can hardly be called failures, are refusing to give the mass audience what its mass of bodies cries out for. Across the world, our hero Philip is depicted receiving another version of Spellingism in Erhard Seminars Training sessions. His very 1983 American trainers insist that he listen to the body and hold it equal or superior to spirit.

In the totalitarian totality of entertainment for entertainment’s sake and no other sake, THE AMERICANS is therefore condemned to a dark corner of television Siberia. Its inhabitants, including its fans as fellow inmates, are left to seek the peculiar victories achievable only there.

2 comments on “The things the body cries out for…”