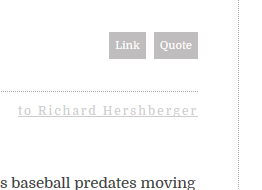 Responding to a user request, and also because I ran across a good code snippet by chance, and because I personally like the feature, and because it answers or at least partly addresses a problem some users noted with “Infinite Replies,” I’ve added an, I think, discreet “in reply to” link that will appear on every comment replying to some other comment. Click on the “to [Ordinary Gentleperson]” in the top right of your comment area, and it will zip you over to the particular comment the comment is commenting under/to.1 Subscribe to Comments Reloaded Up until a couple of days ago, the site had been running an in web terms ancient “Subscribe to Comments” (“S2C”) plug-in2. It worked well enough, so I was putting off doing an update, but Friday night the old S2C finally broke – possibly because it couldn’t handle a needed upgrade in the main scripting program, PHP, that the site depends on. (Something like that was bound to happen sooner or later with such an old plug-in, while problems running on an obsolete PHP version had already begun to crop up.) And so here we are… except actually I was going to say “last night” not “Friday night” when I began writing this post Saturday morning: I ran into some hinks that may be bugs or that I may be able to work around… and getting help with that is as much the purpose of this post now as informing you about the new toy. Further background: The legacy subscriptions set-up was complicated, and to some extent still is, since S2C functionality partly overlapped another comment and post subscription system, part of the popular “Jetpack” suite, and has also been supplemented by a third plug-in, under the ESL title “Mention comment’s Authors,” that produces those email-spawning @reply links some of us use, and that brings along some odd hinks of its own. 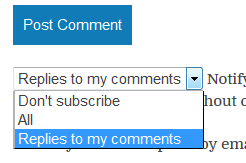 I’ve replaced S2C with an up-to-date successor, “Subscribe to Comments Reloaded.” Like S2C, it comes with a “subscribe without commenting” function (when enabled), and it also offers some new capabilities and options.3. For instance, as you may already have noticed, you now have the ability to subscribe to comment threads in one of two ways, either by subscribing to all comments, or by subscribing just to replies to your own comments. S2CR also gives the user the ability to change those subscription types by going to a subscription management page – in relation to which latter I am still running into those hinks that I was just mentioning, and that I still haven’t solved. In addition to the choice between types of subscription, the most relevant new capability for discussion is the option to make subscription of whichever type the default action for commenters. Some people like that – especially people who often mean to subscribe when they comment, but, who as they hit “Post Comment” regularly forget to tick whatever checkbox. If we do make “subscribe!” the default, standard recommended web practice is to add a “confirm” email to any such default subscription – anything else being thought kind of spammious. We could go without the confirmations, or maybe instead offer a warning, but that will tend to force people to rely on unsubscribe via links in their emails – so, I need to be sure they are working. As I understand it, sending out automated emails without a working unsubscribe link is actually illegal in the US of A, and I don’t want the G-Persons (the other kind) coming after me or Our Tod or Erik. After I’ve verified that we can, in fact, choose between settings without a major functionality sacrifice – in other words that subscriptions are truly manageable for all or close enough users under whichever settings, if there’s any substantial disagreement we can try a poll. If I had full confidence that a) it would work well, and b) everyone would figure it out, I’d go with “default subscribe, default ‘replies to me,’ email confirmations.” So, let me know about your User Experience, and don’t be surprised if the set-up undergoes multiple adjustments and re-adjustments in the coming hours, days, and whenevers, as I try to solve the bugs, or at least isolate them and find a liveable-with arrangement, before moving on to the next round of glitchancements.