We all, or all of us worth knowing on a question such as this one, know the Mystery Man, the pseudo-guy who looks like a reverse polarity keyhole, and who/which is the default avatar for wet-behind-the-ears WordPress sites – only rarely seen at this size:

Problems with the MM: First, it’s lazy to use him. Second, the figure is traditionally taken to be a “he”: Maybe it’s because he seems to be bald. Whatever the explanation, and despite WP’s decision to rename him the “Mystery Person,” relying on him or zir or it may still qualify as sexist.

Third, he happens to be… white.

Now, if you don’t like WordPress’ other built-in alternatives (see image below), adding the code for your own default avatar is easy:

Once selected, the new avatar will appear, assuming proper coding and perhaps following a site refresh or browser cache clearing, wherever the others would have appeared.

I’ve seen other versions of the code snippet that put the avatar in a different folder, and there are also plug-ins that’ll handle this and related functions, of course. In a more complex implementation, we could assign any of a set of default avatars individually to new avatarless commenters, as occurs with the “Generated” versions.

As for my Mog, shehe’s an avatar of not-exactly-color, but not white – in my opinion of no pertickler gender – before a drab off-yellow background of the sort you might see in some boring government office… 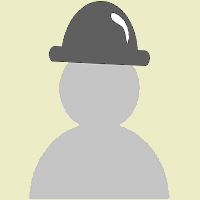 At a typical avatar size:

I added herhis hat with OT in mind – and based on a design suggestion from Ordinary Gentleperson James K – and I chose the background with the specific intention of keeping it less than very attractive, the theory being that we want users not to like wearing the default avatar too much, and instead want them to go to gravatar.com and get their own avatars – it’s not hard – or create or ask for a “local avatar” (an avatar used only at one site) if that option happens to be available (as it happens to be at my site).

Now, I’m not married to Mog. I happen to like himher for now because I have recently been arguing in the threads with a confessed racist who also happens never to have bothered to get his own avatar. It tickles me a little to see him represented as a netizen of tone. Eventually, I will cease to find the idea amusing, and may choose some more serious way to represent avatar-slackers – or I might decide to go avatarless.

Some sites will assign their own branding to avatar-less users. An alternative for Ordinary Times, for instance, might be based on this:

A version of the above is currently in use as the site’s “favicon.” Another possibility, in view of the traditional affection at OT for bowler hats, as in or on Mog, might be this graphic:

The latter hat happens to have been used already at OT, and still turns up in odd places. The explanation would go back to the original name of the site, League of Ordinary Gentlemen, as still evoked in remnant “retro” references and stylings, for instance in the site’s fonts and that old-fashioned bicycle visible in the OT icon. It also turns out, as I was informed (by Ordinarius Burt Likko) in that same discussion with James K, that “ordinary” was another common name for those bikes.

As for the claim (voiced previously by commenter Bert the Turtle) that a bowler hat says “man,” maybe that’s a problem, too – or maybe not!